Oh joy! After trying to get an appointment to see a doctor here in Spain and the first available slot was on the 27/8 I was recommended to go to the a & e at juaneda. A slightly swollen finger injured not 1 or 2 days before, but instead a whopping 10 days earlier, felt a little slight over kill to see the medics at a & e.

But said and done. I decided on my accident and emergency quest on today’s red day as 1. In the morning there won’t be many people around and 2. The parking is free on red days. Today’s red day is Assumption of Mary. Where Virgin Mary, mother of Jesus, was taken back to heaven after her death. It’s also known in our household as Assumption finger day, never assume your finger might be alright.

In a & e when you “sign” in you get to see a nurse and basically tell her your actual urgent problem. For me it started with one nurse and as my story of finger unfolded more audience from other hospital crew came in to explore the life of E. It’s by now like a farce, even I feel like I am making it up, but then I realize it’s true. And the times I remind myself I am still here acting as my own hero in this dark comedy/tragedy of one.

Where do I start? I always manage to amuse with my medical encyclopedia of a body. Basically anything that could go wrong with you has failed on me. I should write a “short” version of medical history… but where to start? What year? 2012 which was my biggest current accident? Or do I go further back? Should I start at the beginning? 1974 is a long long time ago, or should I start backwards? See what I can remember.

It’s sometimes an interesting problem solving exercise for me. I find that laying out and ordering/listing things that’s gone wrong with my body can have a suduko effect on my brain.

29/12/17 fall after disqualification from dance competition, Turks & Caicos, was tripped up by root of tree, was airborne and landed on my breastbone directly on a concrete bench. 3 fractures in sternum.

I’m going to leave it there for now, just with the latest couple of injuries, a new skiing holiday is already booked and I hope to actually stand on some skies this time, as last time I didn’t ski and I managed to fall whilst riding instead.

Some people just stop and look at me with wonder in their eyes, and then often followed by the slow shaking of their head. They do not have to say anything out loud, I can feel my own crazy, just reflected in their small shaking head movement.

Full thumbs up to the staff at Juaneda! In less than 1 1/2 hours I had seen 2 doctors, had ex rays, confirmed fracture in joint in middle finger, massive bandage incorporating an aluminum splint put on by 2 nurses as well as paying my bill and exiting car park without having to pay for any parking! I also got a new consultation time on the 23/8, a full 4 days before my original appointment! 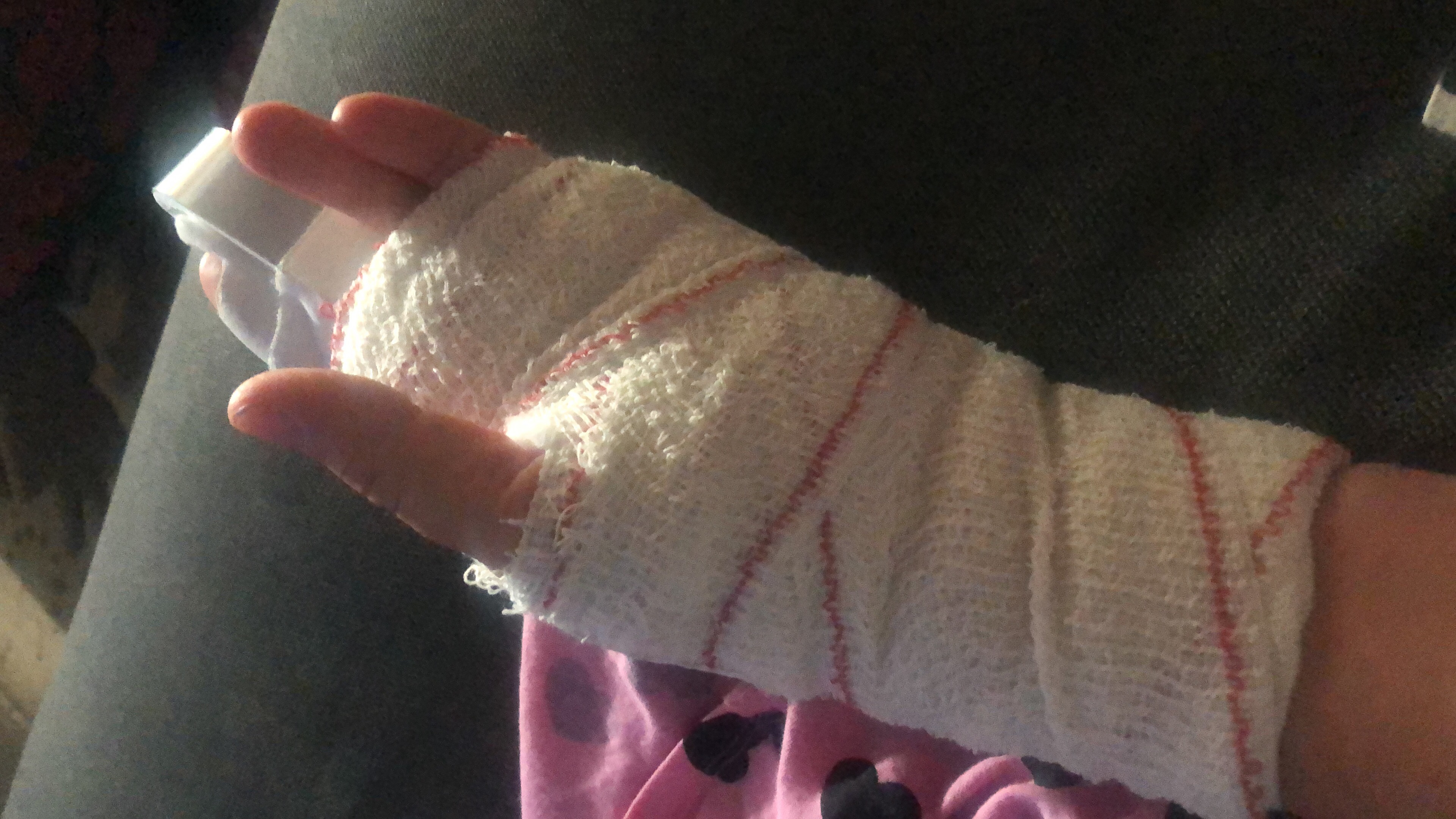 Keep smiling 🙂 some days will feel longer than others but then remind yourself, I’m still here

So again excuses for my absence. As you all know by now, hearing nothing from me is normally a good thing. It means everything is A ok! Naturally I have a busy lifestyle that won’t allow me time to do things like writing a blog or updating anything digital. So I am getting back in shape. Well at least until yesterday.

During a nice morning run in the Stäket forest I managed to find a root to stumble over. I fell hard on to my left side. I managed to turn around mid fall, hence no face or collarbone was involved in the fall. Instead it was my rude left finger.

As I still suffer a little bit with lower sensation on my left hand I wasn’t too worried. There was a little pain, more uncomfortable than painful so I decided to leave the hand and get on with the more important things ahead, my mothers blessing ceremony.

My mother and her husband Oliver were having their blessing ceremony in Västra Ryds church and I was going to help with the cousin choir as well as sing a couple of songs in the church and at the markee later on. There wasn’t really time to reflect over possibility that one might have broken anything, the show had to go on!

After a delightful blessing service and a most magical afternoon and evening I went to bed happy that the hand seamed to be ok.

Then I woke up.

My hand several different shades and colors and a whole new shape. Luckily I knew my step-brother had a good tape I could use to tape my fingers together as we were going out on a boat trip at lake Mälaren. Said and done! Tape of light blue version was strapped around 3 fingers. At least it would keep people away from accidentally touching the finger.

As day went on the hand and the finger never improved. We had a great day out at sea, but when we came back home I knew we had a busy week ahead and I just didn’t want to let this finger ruin everything.

So at 8pm I decided (after talking to a nurse on the telephone) that I should go to the när-akuten. It’s a more local accident and emergency.

I managed to get my uncle Johan to drive me to the hospital. There we found the när-akuten, basically an accident and emergency without any proper doctors… who by the way also did not have any x-ray possibility after 8pm. After parting with €350 I was sent to the orthopedic section. To wait and see a doctor. This was a good 4 hours ago. I have seen a nurse. She said I definitely have to see a doctor as she was not impressed by my color or shape of my naughty finger.

It’s getting gradually worse. There is no forward moving on the queues of other sick people. It’s incomprehensible. How now that I’ve been transferred to accident and emergency it’s like going backwards, people here takes no notice of you. A guy next seat has a dislocated and fractured hand. He is just sitting here, waiting for his plaster and re-jigging. He has been here from 7pm. So he has already been X-rayed. And he is still just sat here.

Swedish hospital system is sooooo weird! I have no idea how this system can ever work? There is nobody to advise or inform us anything. The waiting room is mostly filling up with worried relatives. And me and my bad hand dude.

If anyone knows anything about how to work the strange system please send me a note!

I was just surprised as I overheard 2 people speaking Swedish! Then I realized I’m in Sweden!

I hope to get to see a doctor soon!

Keep smiling 🙂 even when you are alone waiting, you can make new friends! 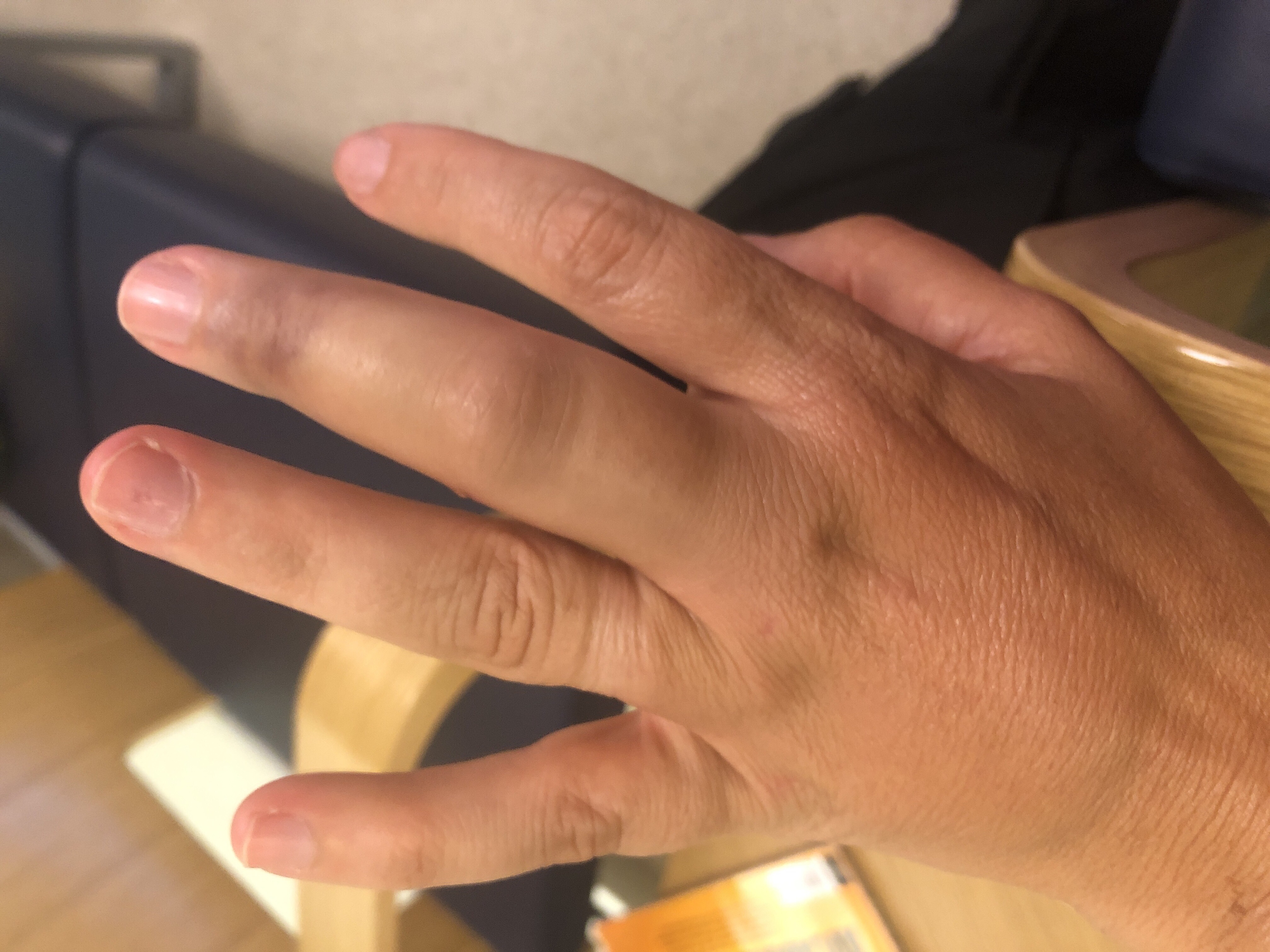