For now! Incredible! August 4th felt so ages away at the beginning of my chemo. In the beginning when I still had hair. Still did not understand how tired I could ever get for no reason other than being. But today has arrived! It’s the day before tomorrow, last chemo cycle of this cancer treatment!

The week leading up to now was less than ideal in our household. It started with Myrna having a fever last Sunday. The fever developed into a stomach upset by Tuesday.

On Wednesday we had the biggest flooding in our house. The water tank at the back of the house no get refilled automatically when the water is low. There is a floater that tells the well of emptiness of the tank. This time the floater didn’t float, instead the tank overfilled into our storage room and playroom. Mel decided to get the stomach bug by now…

Myrna then got severely dehydrated by Thursday. As both the girls were sick I brought both to hospital Thursday. The doctor was worried about Myrna and decided to keep her in for the night. Dan had quite wisely cancelled his cycling event in Austria when we had the flooding so atleast there was someone at home to stay with Mel and Millie.

When Dan arrived home he discovered the body of my lovely dog Smilla on the floor behind our bar. He felt a responsibility to tell me. This was the breaking point of me. I was feeling the unfairness of everything. I don’t mind being ill myself, but by getting my 2 daughters ill and killing my dog, it should somewhere be an end. A full stop. No more drama, tragedy enough!

I’m a quite simple being. I like honesty and straightforwardness. To a fault people might say. Especially after the TBI, I really have a problem with nuances in conversations and tact in my being. (It honestly wasn’t a strong point of my life beforehand but I can now use the TBI card to explain it!) I felt we were being cursed and with all the bad things happening and me still actually keeping some kind of positivity, I fell of the wagon of chirpiness, a deep dark void enclosed it’s acidy jaws around me and tried to drag me down. I couldn’t allow myself to break down in hospital in front of Myrna. She could sense how sad I was, and as the trooper she is she pep talked me through the evening.

Come Friday, Myrna was feeling better, Mel on the other hand had not eaten since Wednesday morning and couldn’t really keep anything  down. I was at home for less than 3 hours with Myrna before I was back at hospital with Mel for a similar stomach thing to Myrna. It turned out Mel had the Rota virus, which Myrna didn’t have. They put her on intravenous antibiotics as she was so bad, the fever would just not come down.

We were supposed to fly to London on Saturday evening. Mel and I were supposed to do museums and sightseeing on the Sunday, I instead managed to change the flight to the Sunday evening. Myrna and Millie were supposed to stay with my brother and his family for the days we were away. As our kids had the stomach thing we had to replan everything and make a schedule of friends and family to stay with our children at the house. Phew, it’s been some planning! I’m truly blessed I have such a great family and superb friends!

Dan rebooked his flights again. Instead of flying from the st Anton cycle race via Münich, he flew Ryan air from Palma with Mel and me to London. We were quite worried about flying as Mel’s stomach still had its own “timetable” for everything, especially number 2s. We came equipped with diapers for the flight. And extra change of clothing… But as luck had it we did not have to use it!

Today has been a day of discovery. It started at 8am with a consultation with a plastic surgeon about the reconstruction of my breast during the mastectomy. He was quite positive about the implant option. The second appointment was a scan of the stomach and chest. They injected me with the contrast dye that makes you get hot flushes ofer your entire body. It would all become clear later on in the day why this was done.

My third appointment was with dr James Mckay, a genetics specialist. He put me in the higher category of genetic breast and ovary cancer. There is a blood test you can do to find out and even though it will have little impact for me as I already have cancer, but it would be good if I have the bad gene for the sake of our daughters.

We then had a few hours to enjoy our friend Osh’s new pub in Islington, The Canonbury. http://www.thecanonbury.co.uk a fabulous inner city pub where Osh is allowed to bring is own super pub skills. It’s still early days, but his clever pub creativity will make it a talking point in Islington!

On our final appointment of the day we met up with 2 more surgeons. By this time they had already got my scan results and had a look at it. It turns out that despite my hernia mesh I’m a good contender for the DIEP surgery. That’s where they take tissue and fat from the belly and create a more natural feeling breast. This would be a better option because I am having radiotherapy straight after the reconstruction. So we had a real 360degree turn around when it came to the options for my reconstruction. We have another meeting with the surgeons again and also the oncologist tomorrow. The biggest drawback with the DIEP reconstruction is the operation time, it’s more than double of that of an implant, also the recovery afterwards is longer BUT you don’t have to have other operations afterwards!

Lots to think about! Tomorrow is another day and hopefully this will be the last of my chemos ever!

Keep smiling 🙂 sometimes the hard times can get harder just to show you what you should be grateful for! In my case my helpful friends and family you rock!! ❤️

I had this picture sent through on an email for an artist exhibiting in Santa Ponca, Julita Malinowska. I thought it was me! 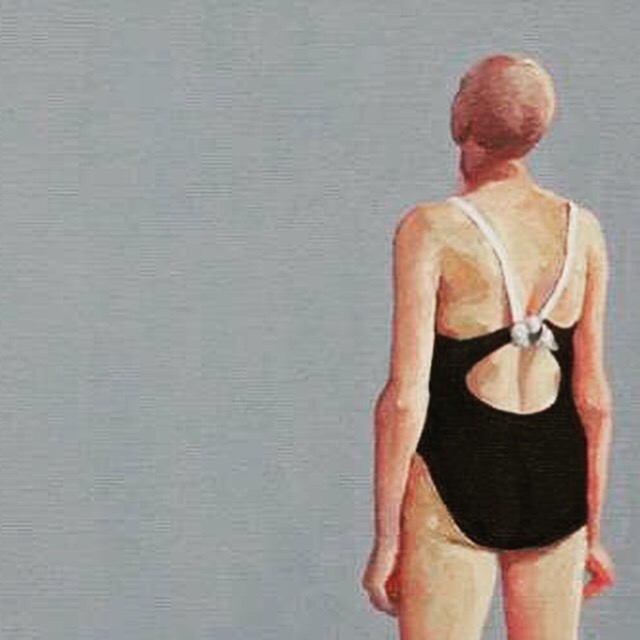 1 thought on “The last chemo tomorrow!”