Here is Oliva Nova. A festival of show jumping that’s held in 4 instances between 2-4 weeks. I was entered to MET III. Three weeks of jumping in March.

We got here last Monday. With 4 horses from Mallorca and another 4 from Sweden. Everybody very excited and horses also.

Here you can ride on the beach every morning as well as under a very big protective roof. You can warm up the horses during clear round classes so I decided to do that with 2 of my horses. The first one was a bit fresh, but after she had a jump around she calmed down. The second one decided he didn’t like jumping. And definitely not where fillers were involved. It took all my efforts and I finally got him around to the last fence that was a vertical with no fillers underneath. He probably had had enough by then and I was probably tired as well so that ended in me on the floor. Nothing broken! But here they go under the new FEI rules even on the clear round course so I wasn’t allowed to jump back on until I had seen a doctor.

Said and done. Saw doctor, got all clear and kept working away on the other horses.

Thursday the other horses were jumping, both Dilba and Clarissimo with Jenny and Splashdance with Jennifer.

Friday my horses started. I had changed plan with the one that had fallen out of love with jumping. I treated him yet again to another clear round and this time I got him round ok. Then we went for a lovely hack on the beach.

First start of the day, first international start for me for 12 years. I was on my favorite horse and we came cantering to first fence, cleared it. On to the second. Here she added a super fast extra stride in before the fence and then started to turn mid-air towards the left. I somehow got catapulted straight up and out to the right. The pain was excruciating. My mind was racing. I kind of heard the crashing sound from my shoulder, and I couldn’t breathe. I did not once loose my consciousness, even though one might have been better off not remembering. The on sight doctors probing and pulling. The knowledge that I probably would not be able to jump any more, at this show, or at any show ever again.

The realisation I had to make the phone call. The one to my number 1 person in the world. To the one doubter of any equestrian sports. I had to call Dan. I had already called him the day before to inform him of the fall on Thursday. He told me to stay careful, I had. I even had taken out the horse that I didn’t feel was ready for the big ring and just brought this mare down to the smaller class.

When I was lying in the ambulance, I made the call. So many realizations coming to me at once. I really am cursed. That was what came back to me over and over again. I am a joke. Even I can not take myself serious any more. How come every time I hear something happening to someone I know the very same thing has already happened to me? I was digging myself deeper and deeper into my ice black cave of self pity. Where all the surfaces reflect my ultimate failures. My endless list of failures that just keeps going on and on. I wanted to scream but all I could let out was a tiny flat a. Like a mouse being squashed. Inside of me I wanted to scream and shout and hate and paint the whole world black. How could it keep happening to me? So unfair on yet another level. But all I could do was to let out a tiny little a.

I felt punctured. Everything about me deflated. I went to the hospital in Dénia, there hearing my insurance wouldn’t pay them directly so I had to pay them myself, then reclaiming it later wards. I was probed on a X-ray shelf, and for me being quite a senior connoisseur when it comes to X-rays, I was quite shocked by the basic-ness of the people working there. Not once was I asked if I was pregnant, not once was I offered to cover up bits of me that weren’t x-rayed. Twice I was asked to breathe in and hold my breath but not allowed to start breathing again… I could give them a course in ABC X-ray for beginners!

The surgeon arrived. He was the first person I felt total confidence in. He said there where 4 fractures in my collarbone/clavicle. He said the best way for it to heal quickly was to put a plate through it. Bionic woman here I come. The titanium plate was coming from Barcelona, and would hopefully arrive the next day, the latest was on Sunday for an operation to happen either Saturday or Monday. I was given some IV painkillers so finally I could think again. When I asked the doctor if I could jump this coming week, he just looked at me, then turned his face towards the wall, looked back at me and said, if you are having this operation you do nothing for 3 weeks.

So that was it. Dream over. Pack up, go home. I went to my dark dungeon of self pity, mirroring my bruised ego. Feeling hopelessly lonely and failed as a human.

The next morning a nurse came in and told me the operation would go ahead at 12. I went down to the lower dungeon of the Dénia hospital, and was in Spanish asked over and over again, was I nervous? Was I just a little bit nervous or was I really nervous? I answered back on my politest Spanish, I was born ready and had no nerves so please get on with it. So they did.

I woke up in the ward. I had no pain. Other than in my hip and thigh that had started to swell up. I couldn’t feel nor move any part of my right hand. As I have already been paralyzed on my left hand side, I kind of know how the mind still can make your fingers move with just the right encouragement. I thought for a minute that oups, they probably cut something off they shouldn’t have… but then the surgeon came in, told me the strong pain blocker they had blocked any sensation from my whole right arm. I asked him if I could have it for the next 4 weeks which he laughed at. I was serious… He then showed me photos from the entire operation. From the first X-ray to the screwing of bones and finishing of with the drilling of titanium plate. I got the 7 picture series, so I can add it to future holiday cards or whatever…

I had to stay one more night in hospital. On the Sunday I was allowed out. Jenny came and got me after her monster day with my 4 extra horses for her to feed, muck our, exercise and last but not least water. A horse drinks about 70liters/ day. In hot weather that can double. That means carrying a minimum of 280 kg water extra per day… that if you weigh more or less 40kg is very much… hopefully the HIIT Exercise we did before my latest accident has made her stronger.

I am now looking for more help for my horses so we can stay here for the whole show. Silly to go back home now. I still go from still acceptance to turbulent denial/refusal of bad-luck-iness as fast as one can think it. I feared this was my last outing, it still could be. But I have to accept this is what it is.

So not much fun to share but keep smiling 🙂 if you end up being the joke, at least smile at it! 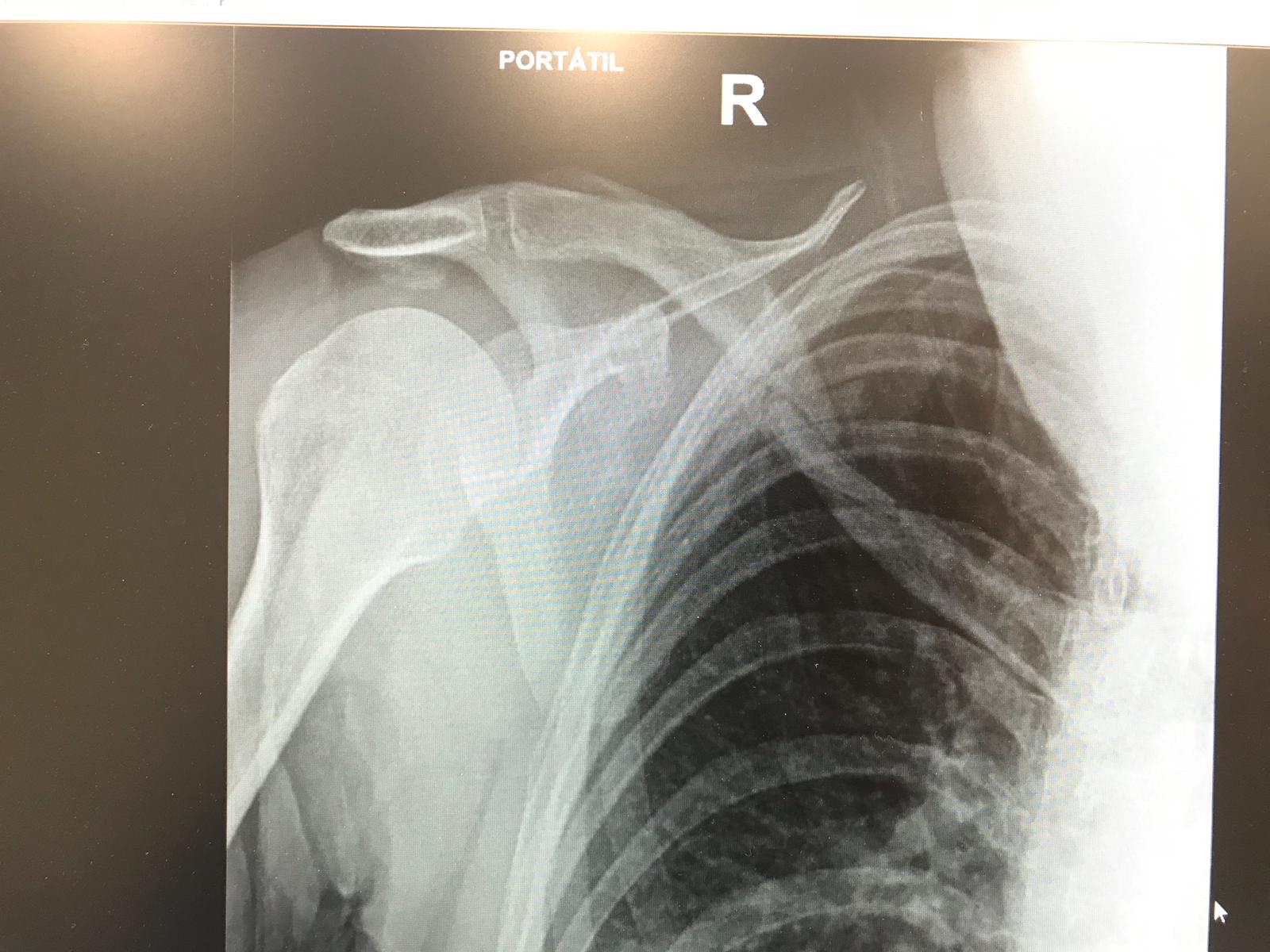 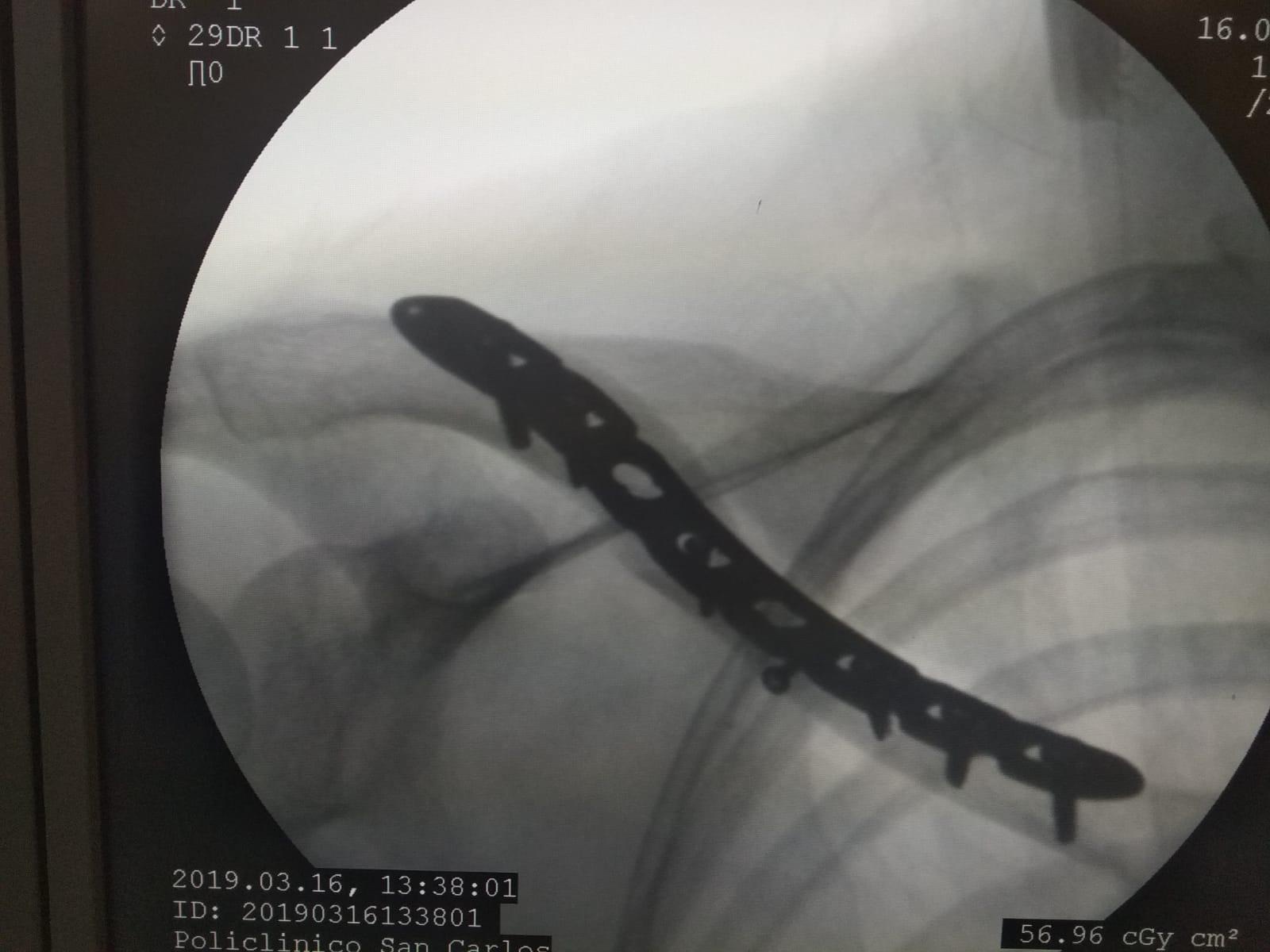